Now here’s a look that turned out a little differently than I had expected – by that, I mean in a good way.

Blue is not a shade that I reach for very often these days, though at a point of time it was something I liked to use when I wanted a dressier and smokier look for nights out.

It could be that I’m having lesser smokier girly night outs these days or that I’m just toning down on the smokiness in my looks now but while I don’t do blues as often, it’s still something nice to revisit especially because it truly is a color that complements brown eye colors incredibly well.

My attempt this time around is what I would like to call a ‘chicken-ed out’ attempt because I wasn’t too keen on going full out smokey with blues for a day at work – that’s a little too much for me even – but while this toned down look doesn’t capture the prowess of the shades as well, I think it’s still a pretty look no less and one I wouldn’t mind doing up again if I felt up for some drama! 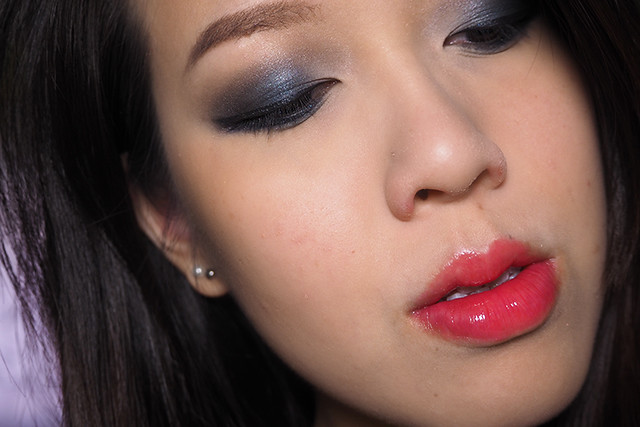 To prevent the look from being too overwhelming, I dabbed a little of that bone-white shade on the inner corners because I noticed that lightening the inner corners helps with taming a look down even if it’s ever so slightly.

If I extend the smokiness the full way then it usually ends up looking quite ‘intense’ and ‘fierce’. 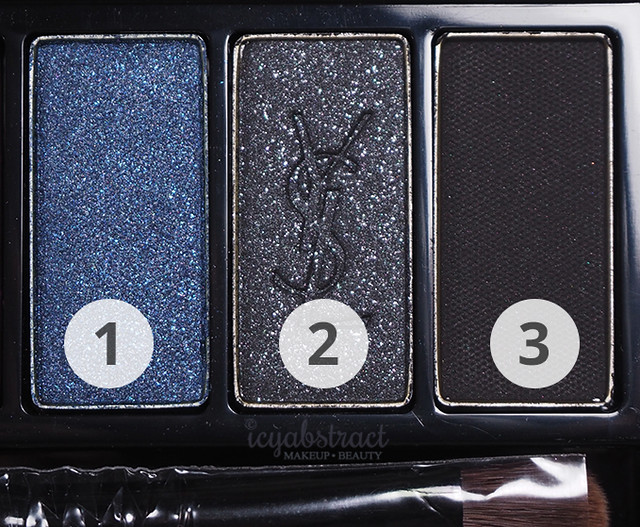 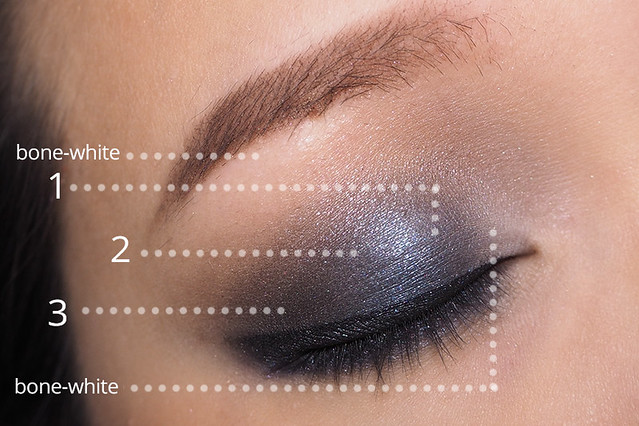 I really love how that sparkly grey looks in the pan and it’s a bit of a pity I couldn’t capture it in it’s full sparkly glory by packing it on the lids, and blending so this look is a little more wearable and seamlessly took away from the sparkles, but I hope you can still see the little glitz and glam it holds in some shots! 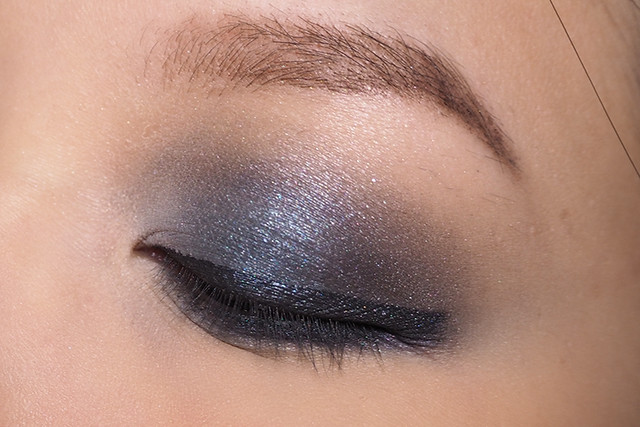 Not forgetting the bejeweled shimmers within the blue shade as well! 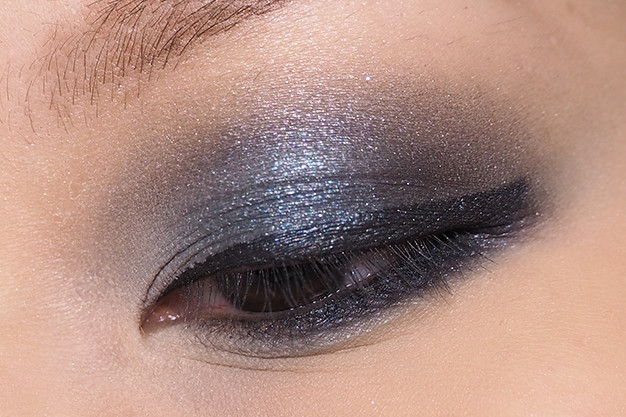 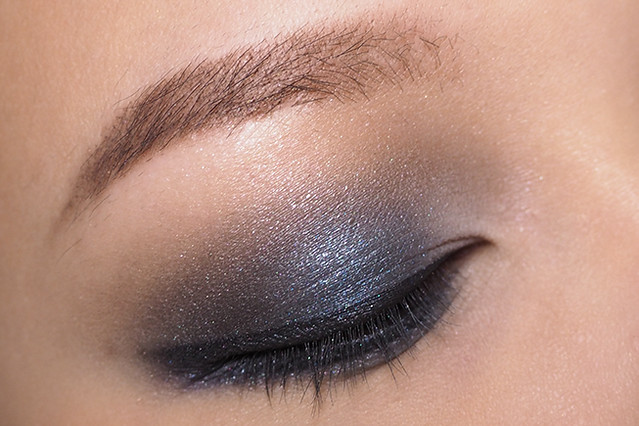 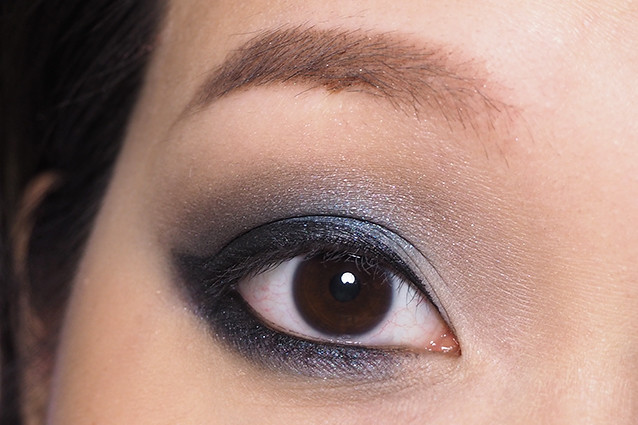 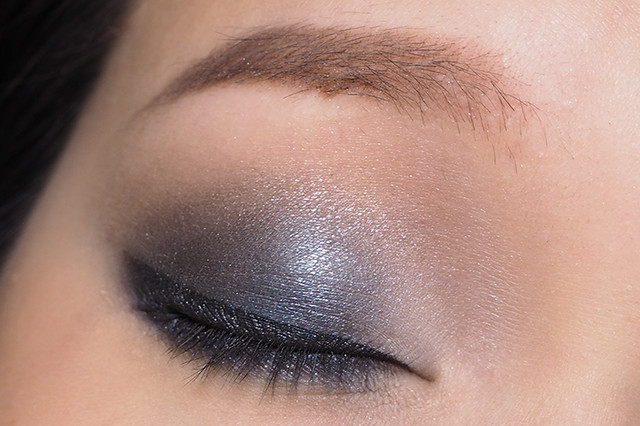 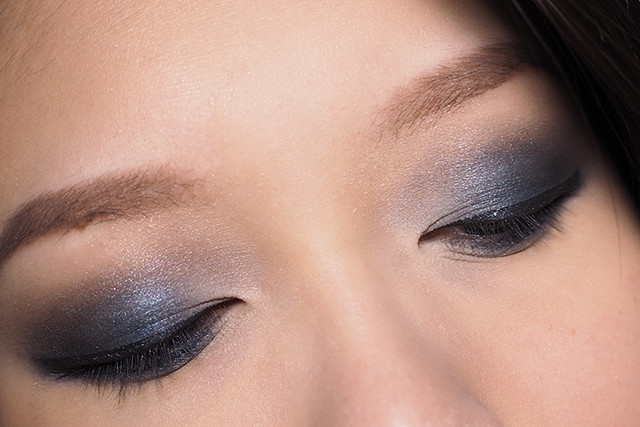 For the lips, I instinctively thought to pair it with a cool-tone, pale and icy pink on the cheeks and lips because that’s my go-to when I use blue or cool tones on the lids.

Though I think I’ve shown enough reds and pinks for the YSL mentions thus far and decided to go against the norm a little and pair the smokey cool blue lids with some warm vibrant orange. 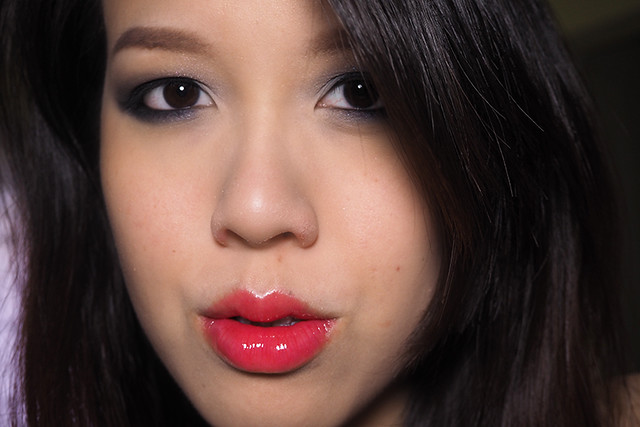 Though making sure the look was still balanced, somehow, I kept the orange sheer and juicy looking instead of being too intense and matte. This way it could add a little translucence to an otherwise strong and smokey look as well. 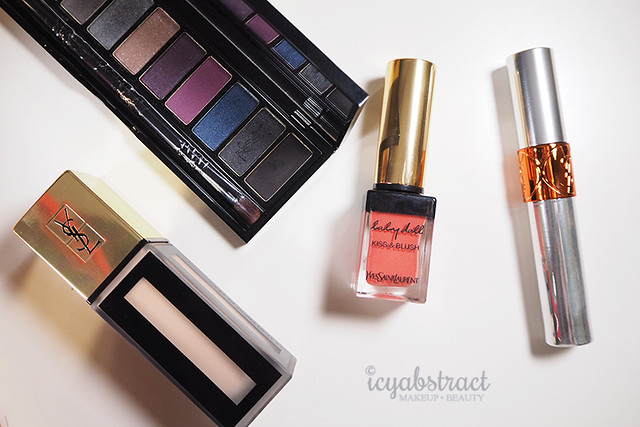 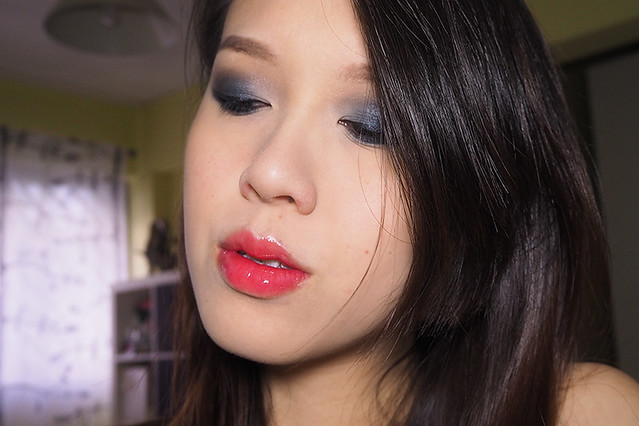 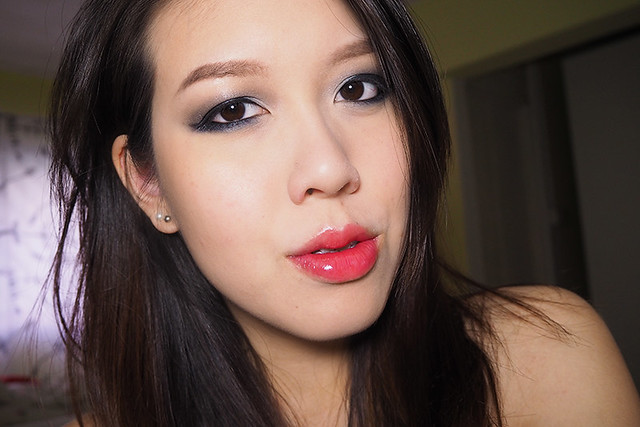 I’ll be speaking more about what’s on the lips in an entry to come but just to scrape the surface a little.

While the shade itself swatches as a straight out tangy orange, the wonders of YSL’s Tint in Oil is that your ‘base color’ or rather naturally lip color plays a part in the final outcome that you see and in this case while it’s got obvious peachy and warm orangey hues, the lips still have a nice rosey hue to prevent the eyes and lips from contrasting too much. 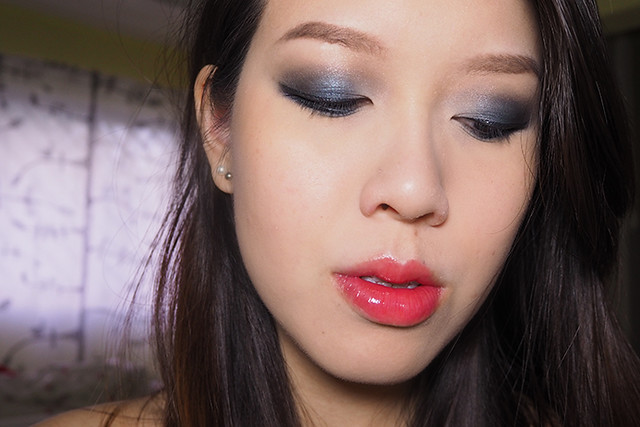 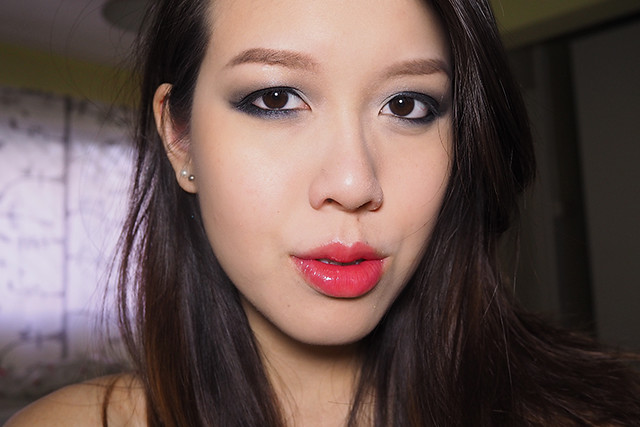 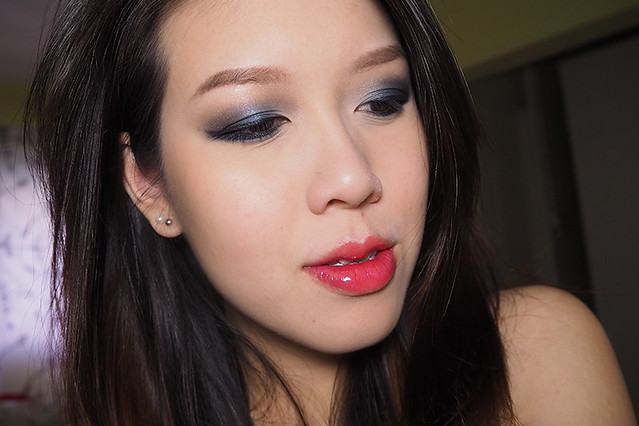 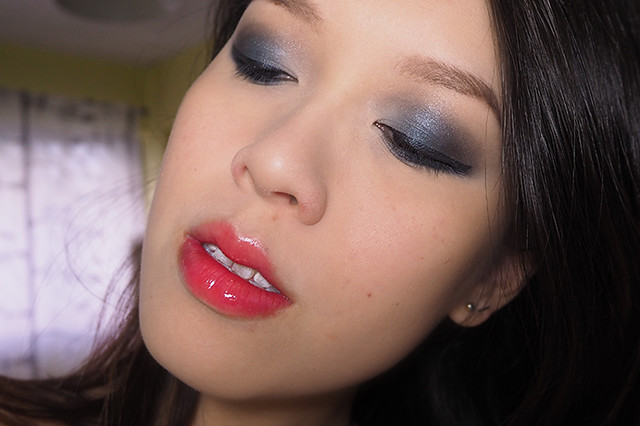 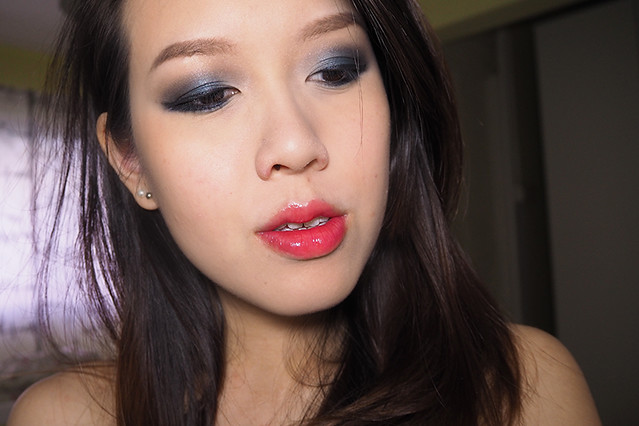 I especially love the watery translucence that the Tint in Oil lends and somehow while in theory it sounds largely similar to YSL’s new Pop Water Glossy Stain, it’s far from that at the same time.

Somehow the Tint in Oils seem to lend a more plushed lip look and a naturally achieved soft gradient to the color that gives a look of ‘rose bud lips’ which is essentially the ombre lip look trend progressing into more natural grounds.

But eitherways, I’ll have more information about the lip products soon so keep a look out for that! 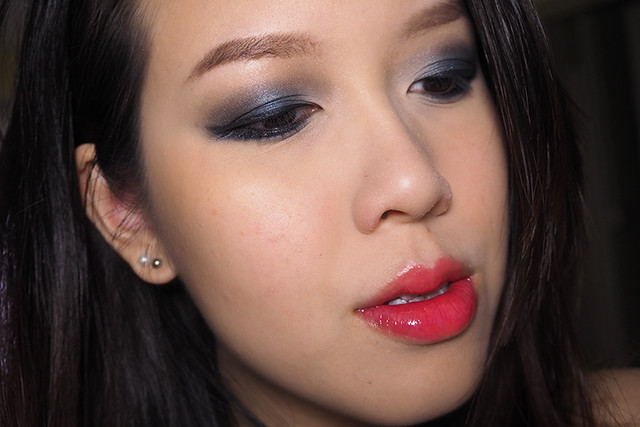 So there you go!

The last of the trio groupings but this doesn’t mark the end of my YSL Tuxedo Couture Variation palette features just yet.

Just to add a little more versatility to the mix I had also done up a look that mixes and matches across the groupings and is also something that’s a little more ‘me’ so I can’t wait to share that!

Stay tuned for it and thanks for reading!

The YSL Couture Variation Eye Palette in Tuxedo retails for S$119 at all YSL counters and boutiques.

This is a permanent item.