If you know how cute this manicure is (credits to the polish, not my creative effort) you would understand why I absolutely had to pop in a heart icon in the title. It’s just too cute, too girly and so sweet!

Not the kind of nail combo I always go for but like something I mentioned to a colleague, it’s Spring and it’s time to let our inner-girlishness out to play! 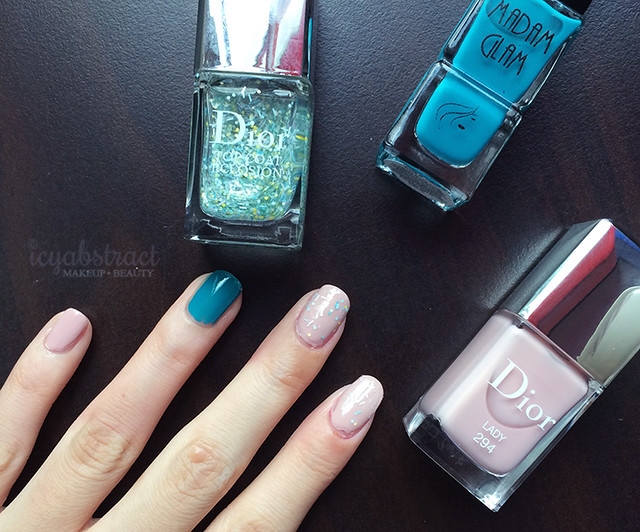 As mentioned in my brief Dior Spring 2015 overview, there are a couple of other nail polish colors offered – a creamy peach and a vibrant salmon sort of red-pink – but what I have on hand to show is this girlish and perfectly demure beige-pink. 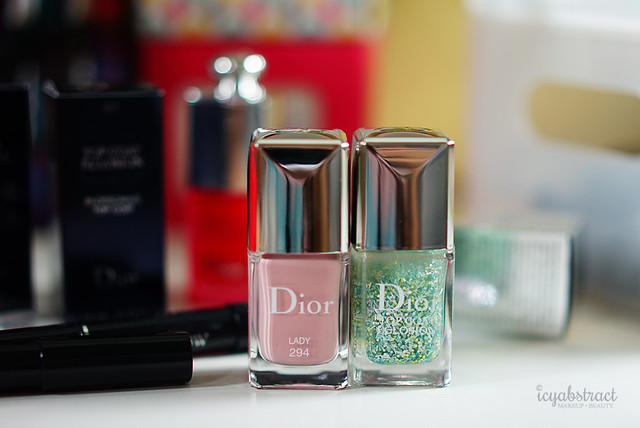 It’s almost nude but it has just enough pink to tip it over to a ballerina sort of elegance with a soft shy air to it.

The other polish, and possibly the star of the lacquer line up for Spring, is the Eclosion Topcoat. 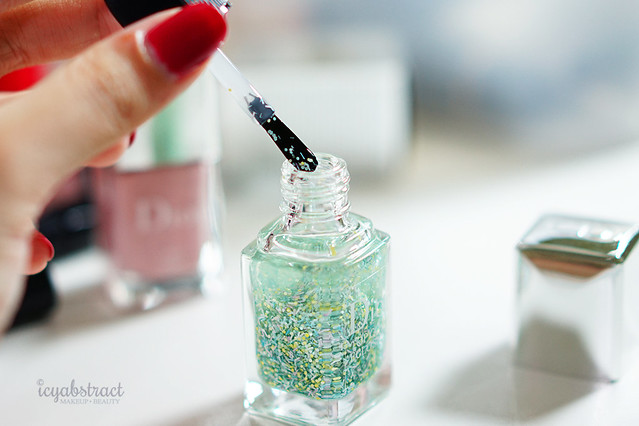 I wasn’t following Dior’s Spring release too closely so I was quite intrigued when I uncovered this from my press bag and while I have mentioned time and time again that I don’t like grit on my nails, the cute mix of pastel bits varying in colors and shapes were just too adorable to resist.

While I could have done a pretty simple all nude-pink look with Lady and the Eclosion Topcoat alone, it just wasn’t ‘me’ enough and I wanted a punch of color to offset the sweetness a little so I popped on some teal (shade is Cote d’Azur) from Madam Glam. 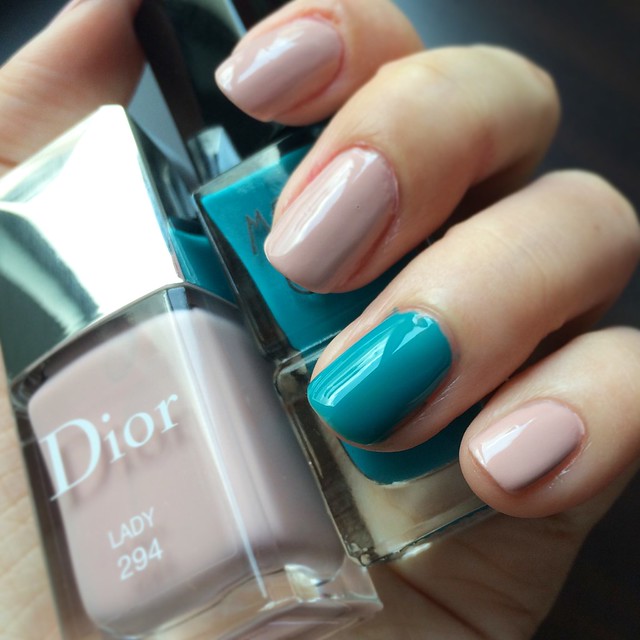 I still haven’t got around to talking about my Madam Glam package in its entirety but I guess until then I’ll stick to featuring some bits and pieces of the polishes that I was sent. 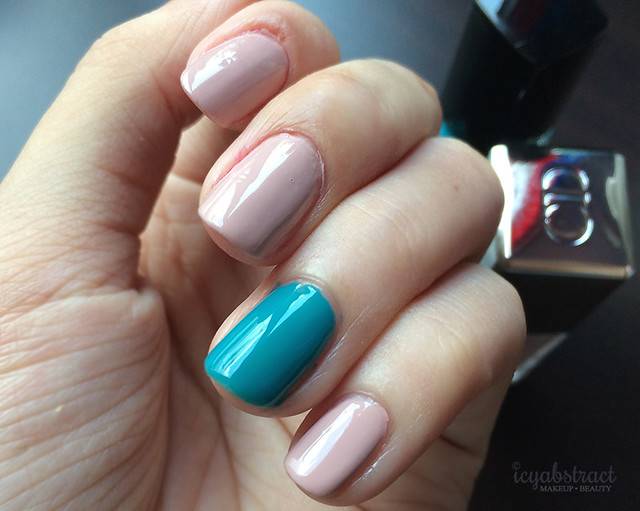 I think I’m quite pleased with the final manicure and it’s a little more ‘effort’ than my usual so I think I’m going to wear this on for a little longer just to make the time spent on multiple painting sessions a little more worth it, heh! 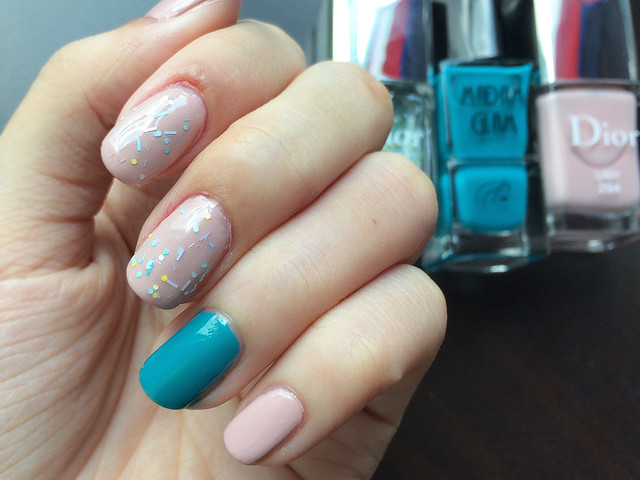 Though okay, I feel I must share some thoughts of the polish, for those who popped by to read what I thought about them. Apart from seeing swatches alone, that is.

Now, usually Dior polishes need no introduction or review because after their recent reformulation, they are all lovely gel-effect polishes that apply wonderfully, have a gorgeous functional brush and dry well without causing troubles. 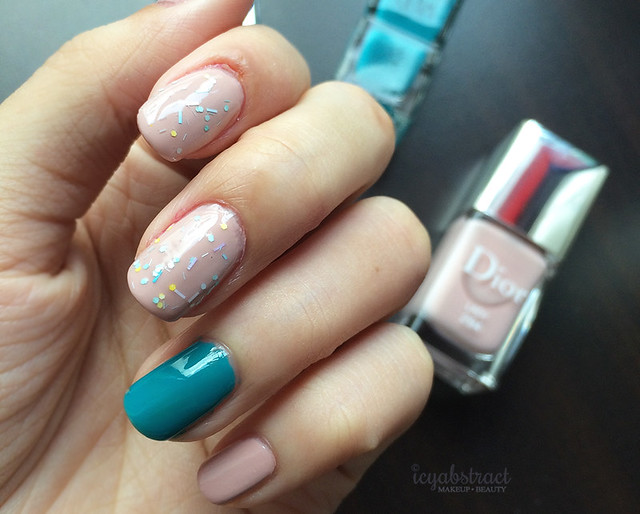 I’ll say Lady is largely like that – it’s quite smooth, color is of good pigmentation and it dries down well to a nice and shiny finish. Though I can’t say I know much of that because I always use a topcoat anyway.

But I did notice that Lady isn’t quite the cream of the crop where Dior polishes are concerned either, such that while it works pretty good for Dior, it’s not the smoothest I’ve tried from the brand.

Something about it makes it a little ‘clumpier’ than usual and not as sheer and smooth on but eitherways, the brush is just as perfect and functional so eventually it all works out. 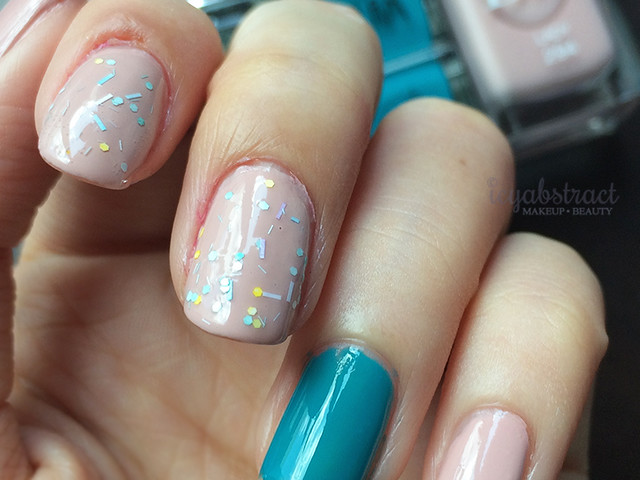 As for the Eclosion Topcoat, you might want to know that the bits are rather dispersed.

It’s not a bad thing because the idea of it is a sprinkle of gritty bits, much like cupcake toppings, but you do need to fish about a little if you don’t want to have too different a distribution on your nails overall. 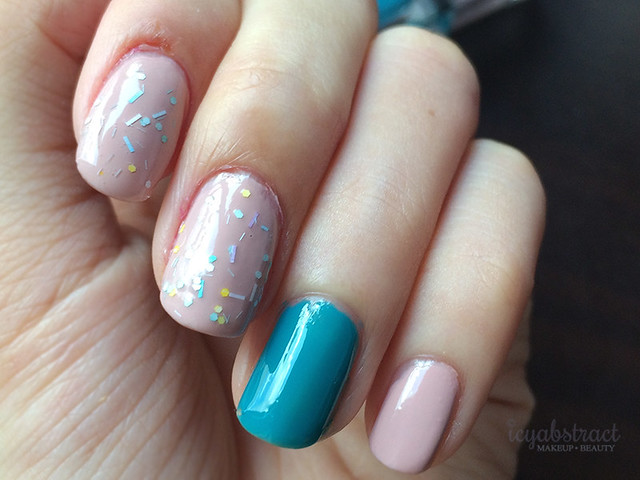 I haven’t tried removing it yet so I can’t judge if it will be a pain but I always assume it will be anyway. 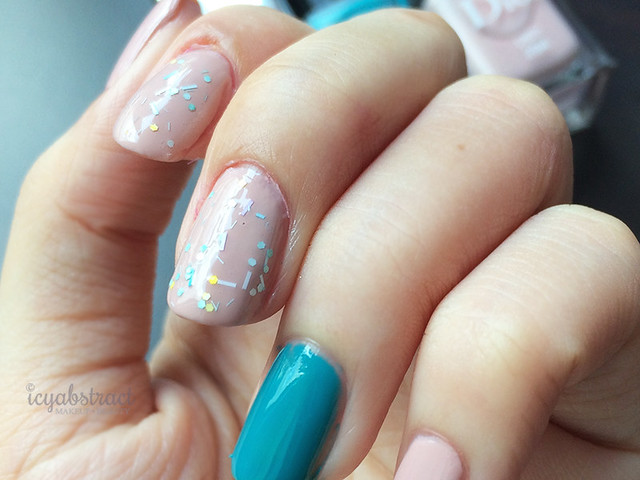 So there you have it, a little look at whats on my nails right now!

I’ve got some belated mentions – stuff that were on my nails that I had shot but not mentioned – which I’ll probably compile into an entry or at least post up real quick without too many words. I’m guessing not everyone wants to read my rambles all the time, heh.

Dior Vernis in Lady and Eclosion Topcoat are Limited Edition (for Spring 2015).

I don’t have the price for now (sorry about that!) but these are already available at Dior counters island-wide!

Guess what! I am finally back with some nail polish!

I can’t even explain how amazing it feels to have colors painted on your nails after leaving them bare for so long.

For those who haven’t been following my skin rants, I had (and actually still sort of have) a pretty bad bout of eczema breakout on my hands and that caused me to stay off painting my nails because it was a total Bi— to remove.

Even an acetone-free nail polish remover (liessssss) would sting my wounds so I guess I would rather just do without all that fancy schmansy for a little while.

But it’s so good to be back to the land of painted talons and what better way than with a pop of pink – perfectly cheery but still so wearable!

I actually have a bag of Lancôme Vernis in Love sitting in a corner of the room, not receiving as much love as it should. I think I may have forgotten about them in the flurry of everything when I first got them but recently, while tidying the room, I uncovered these and fell (Vernis) in love with this beautiful pink.

Lancôme’s Vernis in Love in 343B Rose Pitimini is a perfect sort of brightening pink to wear that isn’t stark yet doesn’t go unnoticed.

You don’t need to prepare your heart to wear it since it isn’t a neon shade that could only work on some occasions, yet I did have some reservations before I thought ‘oh what the heck, I want me some color!’.

I love this color because of how cherubic it is, it just seems to put a smile on my face with how cheery, statement yet feminine it is.

For those who haven’t tried Lancôme’s Vernis in Love, these polishes are generally pretty good. They do not have as glossy a finish as Dior’s Gel Effet polishes but the creaminess and opacity of it is good and it paints on beautifully.

Not forgetting, the bottle is really dainty and feminine as well.

I had no issues working with the brush though for observation purposes I did find the bristles were a little softer than some so a steadier hand would be required.

Overall it shouldn’t be hard to grasp painting these on, here’s how the radiant Rose Pitimini looks on my currently chopped short nails.

I am currently embracing short chops because should I subconsciously or accidentally scratch a rash, it wouldn’t end up being that bad – because nails this short is fairly harmless.

That aside, somehow I feel a whole lot cleaner and lighter, almost like that feeling you get when you chop your long locks off. I am guessing it is mostly all in the mind but having shorter nails also mean lesser dirt and whatnot ‘trapped’ under them, yes?

Doesn’t this just look like Spring and Summer dancing about on your nails? So cheery, bright and fun, yet at the same time relatively work-friendly too (depends of course on your line of work…).

Lancôme Vernis in Love retails for S$30 at Lancôme counters island-wide
343B Rose Pitimini is a permanent color.